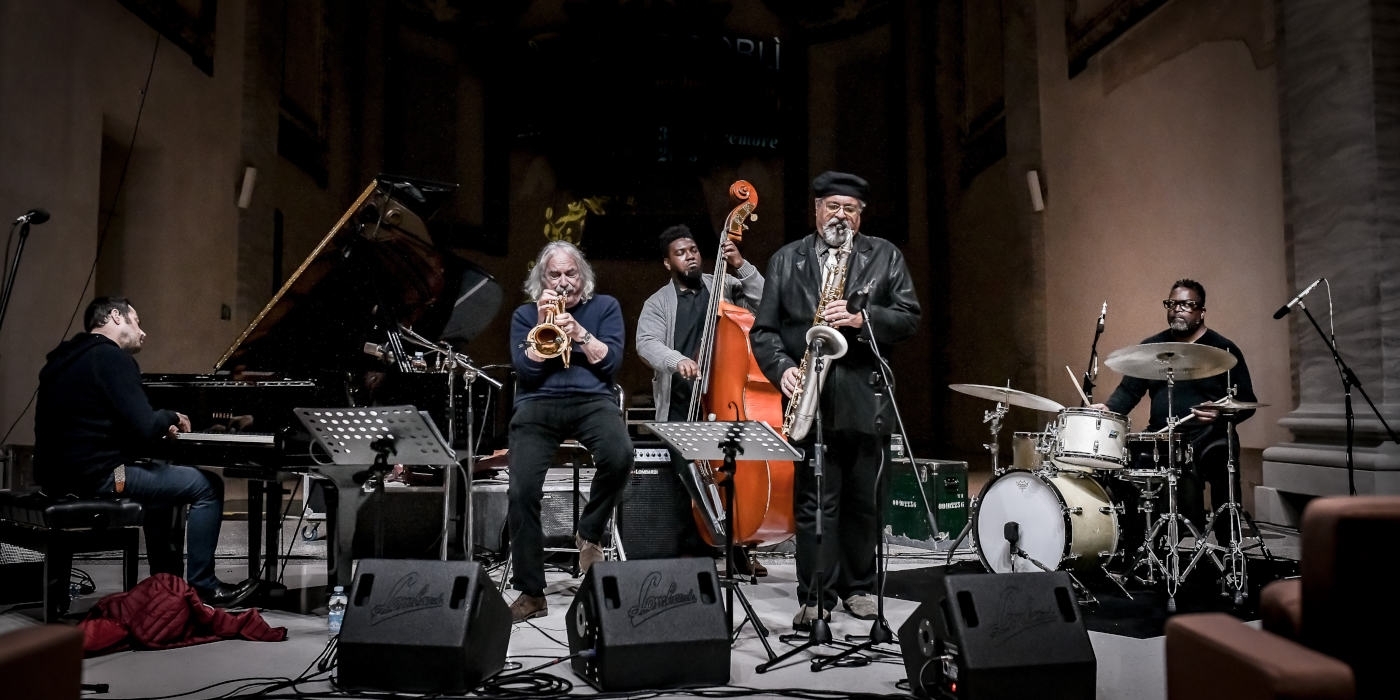 Enrico Rava, the doyen of Italian jazz, joined forces with Joe Lovano, masterful US tenorist of Sicilian heritage, for a brief tour in November 2018. On this album, recorded live at Rome’s Auditorium Parco della Musica, the two masters lead a spirited quintet that includes lyrical pianist Giovanni Guidi, dynamic drummer Gerald Cleaver and virtuosic bassist Dezron Douglas (making his ECM debut here). Well-loved tunes by the two bandleaders form the core of the programme, including Enrico’s intricate “Interiors” and “Secrets” and Joe’s vigorous Texas blues “Fort Worth”, as well as a Lovano original “Divine Timing”, written especially for this ensemble. The album concludes with an extended and powerful medley that roams across the history of modern jazz as it gathers together Lovano’s “Drum Song”, John Coltrane’s “Spiritual” and the standard tune “Over The Rainbow”.

Although they have known each other for a very long time, Rava and Lovano had scarcely played together previously. More than 20 years ago a handful of shared gigs with Miroslav Vitous and Tony Oxley gave a hint of potential to be explored, but the 2018 tour marked the first time that the two bandleaders had shaped and developed repertoire in tandem. Clearly, they share some aesthetic priorities – both might be described as tradition-conscious musical adventurers. Lovano recalls hearing Enrico for the first time in the 1970s: “You could always hear that he had a great passion for the music of Miles Davis, Chet Baker, Art Farmer, Kenny Dorham and Dizzy Gillespie on one side – and for people like Don Cherry on the other side. And that openness and his huge passion about jazz really inspired me. So I thought, over the years, that we were meant to play together eventually. And now I am really happy about this album...”

For his part, Rava notes that “Joe is an absolute master and he plays with an incredible warmth. I feel very close to him since we both have roots deep in the tradition but also project into the future without any self-censorship.”

The inspired rhythm section was assembled by pianist Giovanni Guidi, formerly one of Rava’s gifted disciples and now a major bandleader in his own right (see for instance the recent album Avec le temps). Guidi and drummer Gerald Cleaver have participated in several projects together over the last decade including the ECM album Ida Lupino (with Gianluca Petrella and Louis Sclavis). And Giovanni and bassist Dezron Douglas have latterly collaborated in a quintet with trumpeter Fabrizio Bosso.

“They all listen and react to each other in a very beautiful manner,” says Lovano. “Giovanni Guidi is a very free player who often surprises us in a very stimulating way with his ideas. Dezron Douglas is a really serious strong bass player who acts with a thunderous bass approach, a driving force. And Gerald Cleaver is a very swinging drummer with a lot of propulsive and contrasting elements in his style that really support the way Giovanni and Dezron play. That rhythm section has a truly flowing, exploratory way of playing together.”

The album begins with Rava’s “Interiors” (previously heard on Enrico’s New York Days recording of 2008) and “Secrets” (a tune from the 1980s revived for The Words And The Days in 2005). Enrico: “I feel these are nice pieces to improvise on. Joe plays great on them and brings the music to such a level that it is very inspiring to play after his solos.” Heard exclusively on flugelhorn in this set, Rava plays with the singing sense of melodic invention that has long been a characteristic of his work, in and out of the free zone.

The ensemble flies into Lovano’s “Fort Worth” with great abandon, saluting the Texas blues and making specific allusions also to Ornette Coleman and Dewey Redman, two of Fort Worth’s freest spirits. Joe: “It’s a funky 24 bar blues with a lot of freedom in it, a tune that takes on a very different shape depending on who I’m playing it with. I was really keen to bring it to Enrico and this rhythm section.”

“Drum Song” features Joe on the Hungarian tarogato. He switches to tenor as the music gradually segues into Coltrane’s “Spiritual”, which boils for a while until Giovanni Guidi calms the waters with a freely rhapsodic account of “Over The Rainbow”.
Roma is issued as Enrico Rava, born in Trieste in 1939, celebrates his 80th birthday. Already contributing to historically important recordings in the late 1960s and early 70s, including The Forest And The Zoo with Steve Lacy (1967) and Carla Bley and Paul Haines’s Escalator over The Hill (1971), Rava has been an ECM artist since 1975 when The Pilgrim and the Stars was recorded. His 21st century releases include Rava On The Dance Floor and Tribe, both of which incorporate the piano of Giovanni Guidi.
Roma is Joe Lovano’s second leader or co-leader date for ECM this year, following hard on the heels of the much-praised Trio Tapestry (with Marilyn Crispell and Carmen Castaldi). Lovano made his ECM debut on Paul Motian’s Psalm in 1981, was subsequently a member of the influential trio with Motian and Bill Frisell, whose albums include It Should Have Happened A Long Ago and Time And Time Again. Joe also appears on key ECM recordings with John Abercrombie (Open Land, Within A Song), Marc Johnson (Shades of Jade) and Steve Kuhn (Mostly Coltrane).

Gerald Cleaver first appeared on ECM as a member of Roscoe Mitchell’s Note Factory Band on Nine To Get Ready in 1997. He has since played on recordings for the label with Craig Taborn, Michael Formanek, Miroslav Vitous and Tomasz Stanko.